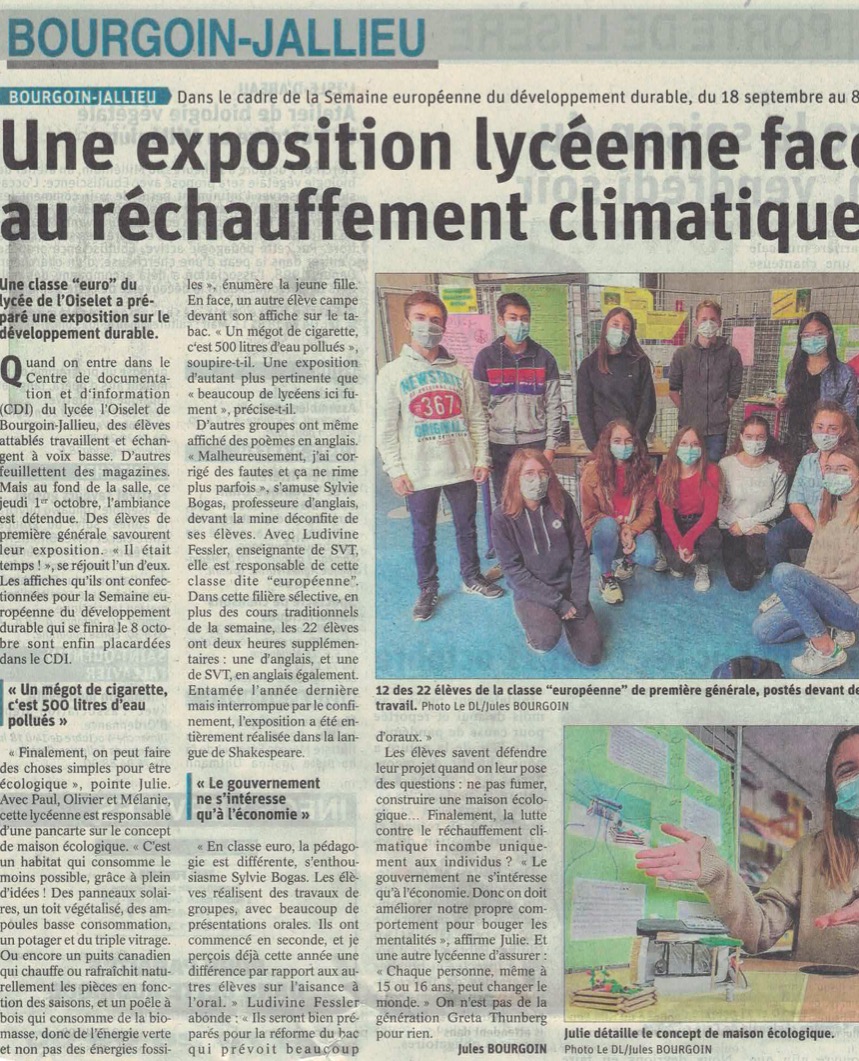 Winner of the best story in Ms. Onu’s class (Seconde): Salomé “My blood was only circling through my veins, I could only hear the sound of leaves like a lugubrious rustle. I could feel his hoarse breath a few steps from me and would run even faster. My heart was pounding, my right leg was hurting me but I continued to be pushed by an invisible force to screamed at me for not stopping. In my haste, I hadn’t seen that enormous root that spent the path and I fell heavily. It’s at this moment, I saw him approaching and all of a sudden… However, these holidays in Reunion island had started well. On my arrival at the Saint-Pierre Pierrefonds airport, I was warmly welcomed by one of the island’s guide[s]. After several hours of driving, I reached my inn located a few steps of Marserims river and forest. The inn was very rustic. My room, that more like the “hiker” room because everyone slept in this room, was composed of a small cot lined up in perfect order. All this was very exciting. My guide had announced me that tomorrow we would go of kayak ride on the Marserims river but, the evening of my arrival, our project was cancelled because a heavy rain shower was announced and the currents would be too dangerous. I was very disappointed but during the night an idea crossed my mind… I shouldn’t had th(is) idea… I would get up when everyone was asleep, take my backpack and put it in: - I should take a sleeping bag in order to sleep in the forest. - I should take a flashlight so that we flash the path. - I should take a lighter in order to light a fire. Stealthily, I was unhooked a kayak and landed it. Until dawn, I was sailing on the river, thinking I should come home before the rain. But the rain started fall… In less than 5 minutes, the volume of water doubled and the currents would be too strong. I lost the control of my kayak and then nothing… When I regained consciousness, in first I felt an immense cold crossing me, then I felt a terrible pain in my right leg. I look at my right leg and suddenly… I saw that it was broken and my jacket was wet but I was alive. I tried to stand up, but the pain in my right leg was too important. Then I went looking for help. I crouched all days long. The evening I was sitting against the tree, dying by the laziness and thirst because I had left my backpack. I hadn’t remember always have either a lighter or flashlight to protect myself when I am in the forest. Lost in the forest which from no way out. I saw a wide boar coming out the thicket a few meters away from me, got up and started running despite my broken leg. At this moment, I didn’t any more. That’s how was standed the ground a few steps that imposing monster. I couldn’t (do) anything but a little voice inside me told me [to] scream but it was the only thing I could try. When I started scream, the boar started running over me, its mouth wide open. I was preparing to feel a violent pain, I closed my eyes and… Nothing, nothing! I opened my eyes. In first I saw the sky, in second I saw the dead boar next to me with a bullet in his heart, finally I saw my guide in front of me with a gun on his shoulder. He had heard the scream(s)! I had managed to survive.”

Winner of the best story in Mrs. Bourrat’s class (Seconde): Tom and Lisa It is 10 a.m. in English class, two endless hours… “Driiiiiiiiiiiiiing!!!” Like every Friday, with my best friends Romane and Léa, we go to take a coffee at break. We must hurry because there are a lot of people in the morning. But… “Theo, wait! I forgot my pencil-case in the classroom”, cried Léa. “You are [a pain in the neck] !” I replied. We went back to the classroom. We opened the door, when all of a sudden… there were no students alive. The class was red with blood, corpses strewn on the ground. At the back of the class, a creature… no… a green man… no…. it was a zombie! The zombie was beheading my teacher! We ran out of the building. As usual, Léa, the brain of the team, said: “Ok, stay calm. He was cold. We must find a shelter with food and drink. The cafeteria is the best place!” We arrived in the cafeteria, when we heard a strange sound… five zombies arose from the shadow. With her legendary courage, Romane hit the first zombie in the head with her beautiful brick. The monster fell on the ground and as for me, who is rather calm and against violence, I finished it thanks to a pair of scissors. “We will not be able to escape them, we must flee!” I shouted. “Go to the supermarket, we must go search for a flashlight, a first-aid medical kit, a power generator, bottled water and canned food!” answered Léa. All three of us ran to save our lives…